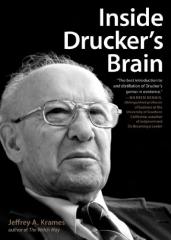 This review was submitted by wendii.

It’s really hard to argue with anything that captures the brilliance and wisdom of Peter Drucker. Think about that – brilliance, that bright flash of penetrating insight, AND wisdom, the power of a lasting idea, in a single person.

The definition of genius.

So, anything Drucker gets high marks for us. And I liked this book, though it is clearly different than most Drucker books. Mr. Krames was scheduled to interview Mr. Drucker for 2 days, but only got one. As such, he didn’t get all of his questions answered. And, I think Mr. Krames probably had to draw more on other works of Drucker than he might have liked.

But as an overview with some interesting highlights, it’s still a good book, and one I recommend (and keep in mind, I really don’t recommend a lot). He covers a lot of ground, and intermixes Mr. Drucker’s shared insights with previous works well.

I really loved the opening anecdote about how Mr. Krames came to have his chance to interview Mr. Drucker. He is a well-known editor and publisher, and has written well about Jack Welch. But when he got the call – from Drucker himself - he says, this was different, “…this was Drucker” (italics his).

I would have reacted the same way.

If you’re looking for something Drucker-esque that’s a bit lighter, this is a good start.

PS: I read an advance copy, and there may have been some changes in the published version, but I can’t imagine anything changing my recommendation. Further, I did a poor job of responding to Mr. Krame’s publicity team regarding interviewing him for Manager Tools, which I regret. While my recommendation isn’t intended to make up for that, it would be nice in a karmic way – a good book about Peter Drucker and his genius deserves it.