Need Help With Your New Years Resolution Job Hunt?
We Have Just The Tool For You!
The Interviewing Series

The Soul of a New Machine 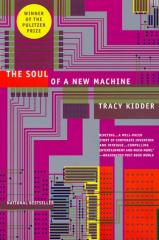 This review was submitted by mauzenne.

I almost didn't review this book, and when you read the review, you'll wonder why. The reason I almost did not review it is because it was originally published in 1981. I thought, "Naah. Too old... old technology, everybody's either read it or I won't be able to get anyone to read it."

Then I remembered Peter Drucker, whom people shy away from. I thought about when he started writing (those books still have traction), and I thought... WAIT.

Soul of a New Machine is the finest non-fiction historical business reporting I've ever read.

It is so good Tracy Kidder won the Pulitzer Prize for it. Kidder also went on to write House, the story of a house being built from scratch, that should be required reading for anyone doing so even today. Some of its passages are so lyrical, they're poetry.

Soul tells the story of a team of programmers and engineers designing a state of the art computer (Eagle, later Eclipse) for Data General, who then were rivals of larger, more well known Digital Equipment Company (DEC). It is a detailed, gripping report of a team faced with a herculean task, and how they approach it. The problems are identical to virtually every team that has ever designed and built anything, and incredibly fascinating for anyone involved in Information Technology today. It's all true, and yet the drama of a thriller crawls right along with the text. Late nights, arguments over who gets credit, personality clashes, clever technological breakthroughs from unusual inspirations, arguments over which new person to hire... it's all here.

This is as good as any fiction you will read for fun this year.

When I said that I look for good writing, this is what I meant. Tracy Kidder is as good as they get. Below is an excerpt, the last paragraph of the Prologue. The main character of the book is Tom West (though this book is decidedly NOT about him). In this excerpt, used as foreshadowing, he has been on vacation from the team.

The people who shared the journey remembered West. The following winter, describing [a nasty storm they went through], the captain remarked, "That fellow West is a good man in a storm." The psychologist did not see West again, but remained curious about him. "He didn't sleep for four nights! Four whole nights!" And if that trip had been his idea of a vacation, where, the psychologist wanted to know, did he work?

Absolutely brilliant in every way. Please read it.

[PS: If you ever wanted proof that one cannot place complete trust in Amazon rankings, read them for this masterpiece. It DOESN'T get five stars. Rubbish! - H]

Awesome read for anyone bulding and delivering products/services

The technology may be old but putting together a team and having them perform over the long term is not.  This is a must read for anyone that wants to understand creating the key aspects of a high performance team.

Tom West died in 2011 - read his obituary, then this book

I read this book in 1985, and still re-read it every two years or so. The technology is more than dated, but, working in embedded systems, I experience similar endeavors every now and then. No managers like Tom West, though.

If you hesitate to read this book, read Tom's obituary here: http://www.channelregister.co.uk/2011/05/24/tom_west_obit/